Southern Culture on the Skids - Liquored Up & Lacquered Down - LP 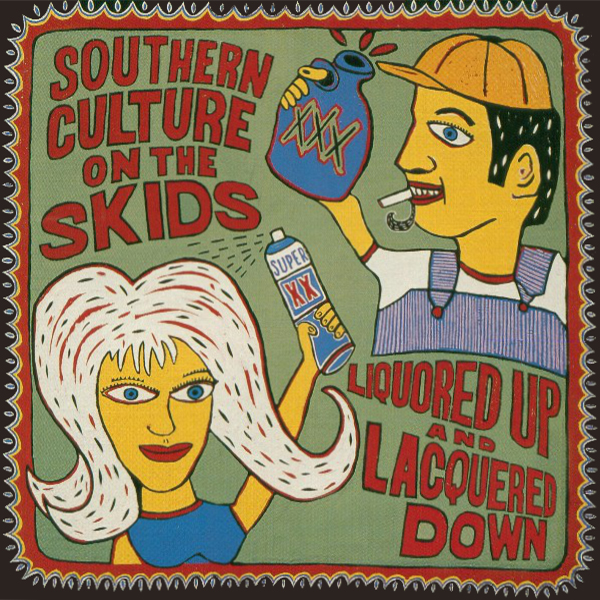 Those who like their music on the humorous side will more than enjoy the raucous seventh release from Southern Culture on the Skids. To label this North Carolina-based quartet under the category of Southern rock would be limiting. On Liquored Up and Lacquered Down, Southern Culture on the Skids melds different styles into its core Southern rock sound and breaks many traditional rules of the genre. One of the talents of Southern Culture on the Skids lies in its ability to musically venture way out there -- industrial-like processed vocals, high-reverb surf guitar, Spanish-style horn parts, and other un-Southern rock-like treatments -- and bring the songs back home. It's the kind of cohesiveness found among groups who've developed a synergy from years of playing together. Liquored Up and Lacquered Down is an example of true ensemble playing, where the parts all effortlessly work together, no matter how far out the musicians take them. "Pass the Hatchet" combines '60s-style shag music, psychedelic rhythm lines, and a shuffling snare drum inherent to rockabilly. This is a party song that can easily fit in on a movie soundtrack, à la Austin Powers. The collection does take a turn to the minimalist side in "Over It," which features mostly bone-dry parts, with perhaps a bit of reverb on the vocals and guitars. It's a real tribute to '50s rock & roll. On the set's choicest number, "I Learned to Dance in Mississippi," industrial-style distorted guitars and vocals meet rollicking country music; another example of the band's adventurous and eclectic nature. It's no coincidence that a group named Southern Culture on the Skids writes songs about drinking, drinking, and more drinking, in a variety of milieus. But it all comes off as harmless banter thanks to the honky tonk party music. Co-lead singers Rick Miller (guitar) and Mary Huff (bass) resemble the Big Bopper and Grace Slick, respectively, on some songs, and rival the vocal antics of Fred Schneider and Kate Pierson of the B-52's. There are no radio hits here, but that's only because there really aren't many stations that support this kind of offbeat, genre-straddling Southern rock music. However, Liquored Up and Lacquered Down would be right at home in bars, Karaoke clubs, jukeboxes, and the collections of those who like off-the-beaten-path Southern rock party music.

A1 Liquored Up And Lacquered Down

A2 Hittin' On Nothing

A3 Pass The Hatchet

A5 Drunk And Lonesome (Again)

A7 Just How Lonely

B1 I Learned To Dance In Mississippi

B2 King Of The Mountain

B3 The Corn Rocket