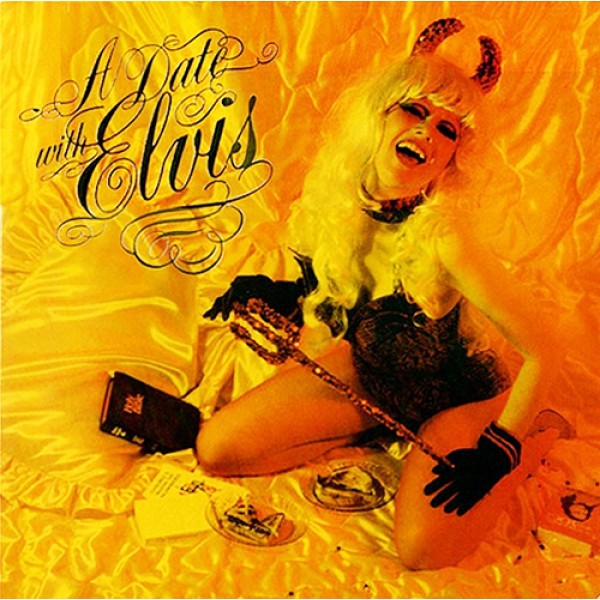 A Date with Elvis is the third full-length studio album by the American garage punk band the Cramps, released in the UK on Big Beat Records in 1986. The title was appropriated from A Date with Elvis (1959), the eighth album by Elvis Presley. The album was recorded in fall 1985 and engineered by Steve McMillan and Mark Ettel at Ocean Way Studios in Hollywood, California. The album was first released in the US in 1990 by Enigma Records, with the bonus tracks "Blue Moon Baby," "Georgia Lee Brown," "Give Me a Woman," and "Get Off the Road." The Cramps reissued the album (with bonus tracks) on their own Vengeance Records in 2001. The original album was reissued in the UK by Big Beat in 2013 on orange vinyl, and subsequently reissued again by Vengeance Records in the US, UK and Canada in 2014. It was The Cramps’ most commercially successful album release, reaching the US Billboard Top 100 and UK Top 40.

The album was dedicated to Ricky Nelson, whose version of the song "Lonesome Town" (covered by the Cramps on their first EP Gravest Hits and later included on compilation album ...Off the Bone) was a US hit single in 1958. It is also significant in that it is the only Cramps album to feature vocals by guitarist Poison Ivy, on "Kizmiaz". Limited color vinyl reissue

A2 The Hot Pearl Snatch

A3 People Ain't No Good

A4 What's Inside A Girl?

A5 Can Your Pussy Do The Dog?

B4 (Hot Pool Of) Womanneed

B5 Aloha From Hell

B6 It's Just That Song