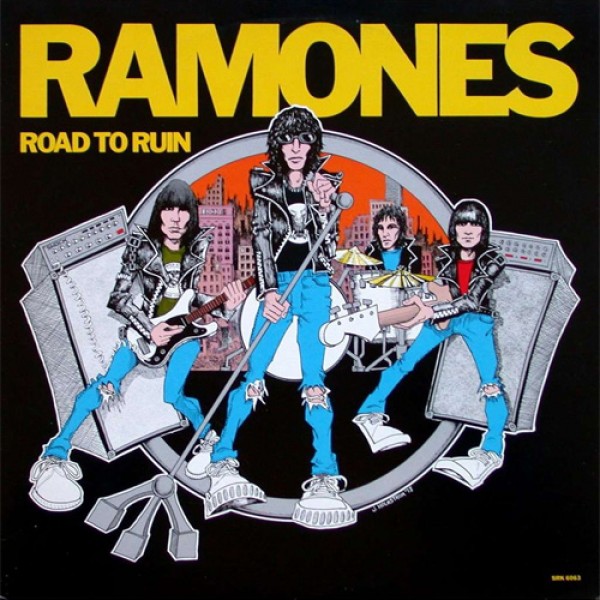 Road to Ruin is the fourth studio album by the American punk rock band The Ramones. It was released on September 21, 1978 through Sire Records. It was the first Ramones album to feature new drummer Marky Ramone, replacing founding member Tommy Ramone.

Road to Ruin shows a more "classic" pop sound as well as a shift to a more serious personality to the music, a theme that would remain in later albums, most notably the band's fifth album End of the Century (1980). The influence of 1960s girl groups is evident, as well as the influence of The Byrds on tracks including "Don't Come Close" and the cover of "Needles and Pins", originally by Jackie DeShannon and later a hit for The Searchers.

The album also contains the track "I Wanna Be Sedated", one of the band's most famous songs.

Road to Ruin was the Ramones' first album with Marky Ramone on drums, after original drummer Tommy Ramone left due to fatigue from touring. However, Tommy (credited as his birth name, Tommy Erdelyi) stayed to produce Road to Ruin, as well as a brief comeback for 1984's Too Tough to Die.

Samhain - November Coming Fire - LP - color vinyl
The second album from one of Glenn Danzig’s many legendary outfits is pure horror punk from start to..
$34.98 text_tax $34.98
Add to Cart
Add to Wish List
Compare this Product

Misfits - Night of the Living Dead - 7" - color vinyl
Fan club reissue of the Misfits 4th single release from 1979, on color vinyl!TracklistA Night Of The..
$10.98 text_tax $10.98
Add to Cart
Add to Wish List
Compare this Product