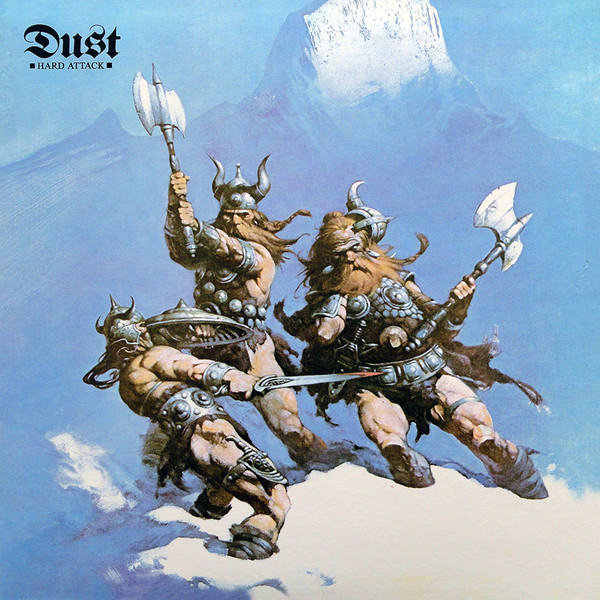 Hard Attack by Dust is an improvement over the acceptable performance of the self-titled debut from the year before. The team of producer Kenny Kerner and vocalist/guitarist/producer Richie Wise do just what the title suggests, bringing a harder attack to songs like "Pull Away/So Many Times" and "Ivory," the latter an instrumental with emphasis on guitar riffs and cymbal work. It's an all-out assault from the trio and pretty interesting, though the album as a whole works better when Thog's Fred Singer adds piano and organ. "How Many Horses" benefits from keyboard presence, and brings the group back to the Leslie West/Mountain flavors so obvious on the group's 1971 debut. That song definitely sounds like Dust was intent on remaking the Jack Bruce/Mountain classic "Theme From an Imaginary Western," one of that group's highlights. That the quieter moments, the elegant "Walk in the Soft Rain" and "How Many Horses," work better than the brutally hard "Suicide" hints at the adult contemporary leanings of Kerner and Wise. That they would merge this group with their labelmates in the band Stories for 1973's Traveling Underground is more evidence of what musical style they were more comfortable with. Unlike the commercial happy style of Stories, this album is obsessed with death -- perhaps a marketing tool to the hard rock audience with that theme running through the disc. It's no secret why Stories lead singer Ian Lloyd ended up on Scotti Brothers Records in 1979 and 1980: Producer Wise, the lead singer of Dust, was A&R man at that label. The two Dust albums provide evidence that there were some music business execs who actually had talent. The wonderful Frank Frazetta artwork on the front of the album also shows good taste. Frazetta did many a cover drawing for Creepy and Eerie magazines. It's a well-known fact that Gene Simmons from Kiss came from the world of fanzines and fantasy, and it should be no surprise that Wise and Kerner went on to produce the debut from Kiss in 1974 on Neil Bogart's Casablanca imprint.

A1 Pull Away/So Many Times

A2 Walk In The Soft Rain

A4 Learning To Die

B2 I Been Thinkin

B4 How Many Horses