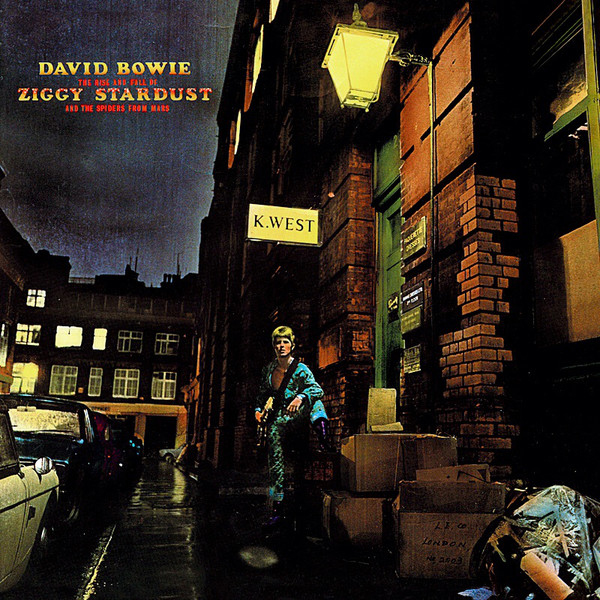 The Rise and Fall of Ziggy Stardust and the Spiders from Mars (often shortened to Ziggy Stardust) is the fifth studio album by English musician David Bowie, released on 16 June 1972 in the UK by RCA Records. It was co-produced by Bowie and Ken Scott and features Bowie's backing band the Spiders from Mars, comprising Mick Ronson, Trevor Bolder and Mick Woodmansey. Most of the songs were written around the same time as Bowie's previous album Hunky Dory (1971). After that album was completed, recording for Ziggy Stardust commenced in November 1971 at Trident Studios in London, with further sessions in early February 1972.

Described as a loose concept album and rock opera, Ziggy Stardust concerns Bowie's titular alter ego Ziggy Stardust, a fictional androgynous and bisexual rock star who is sent to Earth as a savior before an impending apocalyptic disaster. In its story, Ziggy wins the hearts of fans but suffers a fall from grace after succumbing to his own ego. The character was inspired by numerous musicians, including singers Vince Taylor and Iggy Pop. Most of the album's concept was developed after the songs were recorded. The album's music has been characterised as glam rock and proto-punk. Influences included Iggy Pop, the Velvet Underground, and Marc Bolan of T. Rex. The album's lyrics discuss the artificiality of rock music, political issues, drug use, sexual orientation and stardom. The album cover, photographed in monochrome and recoloured, was taken in London, outside the home of furriers "K. West".

Preceded by the single "Starman", Ziggy Stardust peaked at number 5 in the UK and number 75 in the US. It initially received favorable reviews from music critics, with some praising the musicality and concept and others unable to comprehend it. Bowie's performance of "Starman" on the British television programme Top of the Pops in early July 1972 propelled him to stardom. The Ziggy character was retained for the subsequent Ziggy Stardust Tour, leaving Bowie unable to differentiate between Ziggy and himself. Not wanting Ziggy to define him, Bowie created a new character for his next album Aladdin Sane (1973), which Bowie described as "Ziggy goes to America". Performances from the tour were later released on a concert film of the same name with an accompanying live album (1983) and Live Santa Monica '72 (2008).

Retrospectively, Ziggy Stardust is considered one of Bowie's best works, one of the best glam rock albums and has appeared on numerous lists of the greatest albums of all time. Bowie had ideas for a musical based on the album, although this project never came to fruition; ideas were later used for his 1974 album Diamond Dogs. The album has been reissued several times and was remastered in 2012 for its 40th anniversary. In 2017, it was selected for preservation in the National Recording Registry, being deemed "culturally, historically, or artistically significant" by the Library of Congress.

This is a limited edition reissue on color vinyl

B3 Hang On To Yourself