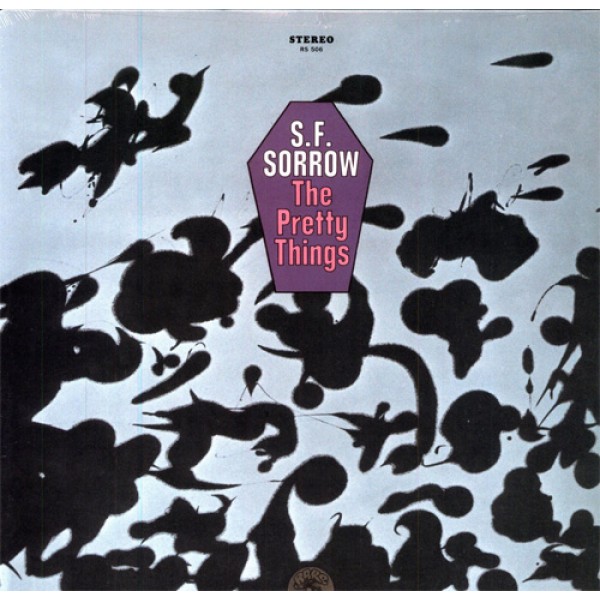 The Pretty Things started as blues-rock band in the early 1960s, and they’re often described as being “meaner, louder, uglier and with longer hair” than the Rolling Stones. (Pretty Things guitarist Dick Taylor originally played bass in the Stones). Their gritty, primitive R&B sound was heavily influenced by Bo Diddley’s beat.

With their fourth album, S.F. Sorrow,the Pretty Things decided to shake it up a bit and create a psychedelic rock opera that some regard as a lost masterpiece . It’s held in the same high regard as another lost 60s classic, Odessey and Oracle by the Zombies. In fact, S.F. Sorrow was the first rock opera, not Tommy. Although Pete Townshend has pointedly denied that S.F. Sorrow was an influence on Tommy, this seems unlikely.

S.F. Sorrow was recorded between December 1967 and September 1968 at Abbey Road Studios. The sound incorporates the sitar, Mellotron, flute, dulcimer and tripped out sound effects.. At the same time, the album’s producer, Norman “Hurricane” Smith was working with Pink Floyd on their A Saucerful Of Secrets album and The Beatles were recording their White Album. (S.F. Sorrow came out the same week as the White Album and Beggars Banquet).

The opera’s libretto came in the form of liner notes that told the story of one Sebastian F. Sorrow, an ordinary fellow who works at the “Misery Factory” and is drafted into World War I. His life descends into meaninglessness after he witnesses a hot-air balloon carrying his fiance crash and burn. Along the way he has an encounter with a mysterious whip-cracking character called “Baron Saturday” (based on the voodoo deity Baron Samedi).

One of the first rock concept albums, S.F. Sorrow was based on a short story by singer-guitarist Phil May. The album is structured as a song cycle, telling the story of the main character, Sebastian F. Sorrow, from birth through love, war, tragedy, madness, and the disillusionment of old age.   Its original  U.S. release was abortive at best. It ranks along side "Odessy & Oracle" as a lost gem begging to be rediscovered

This classic reissue belongs in every garage & psych fan's collection!