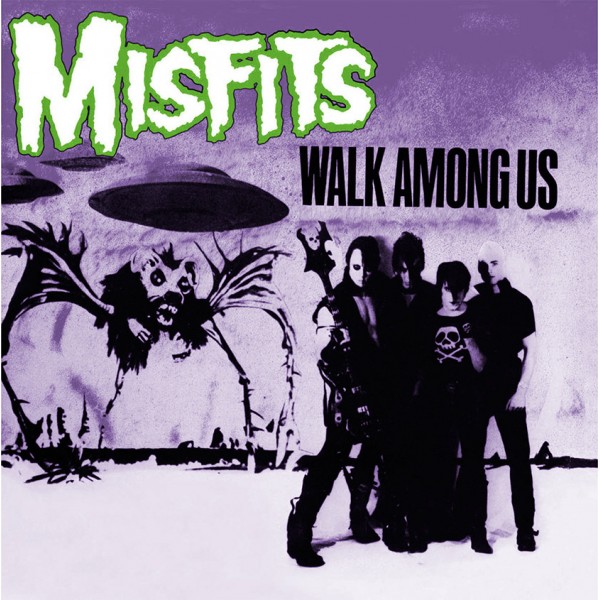 The Misfits' 1982 debut full-length, Walk Among Us, rapidly became a legendary effort of U.S. punk, the more so because it so willfully violated many rules which were already ironically straitjacketing the scene. Utterly devoid of political confrontation or social uplift, embracing a costume sense that might have given Kiss pause and generally coming across like the horror-movie nightmares they looked like on the cover, The Misfits just wanted to entertain and do their own thing -- and that they did, brilliantly. Nearly every song on the album -- 13 total, delivered in a light-speed 25 minutes -- is a twisted classic, with the band's trademark '50s/'60s melodies run through a punk/metal meatgrinder on full display. The higher-budget (in very relative terms) recording meant a slightly cleaner and brighter sound all around, but nothing about Walk Among Us is slick, especially in commercial 1982 terms. One song title says it all: "All Hell Breaks Loose." Danzig's gift for creepy, strong, and attractively dark singing was long since established and he uses it brilliantly, making the over-the-top lyrics all the more enjoyable, while Doyle, Jerry Only, and Arthur Googy kick out the jams on Danzig's songs big time -- check out "Hatebreeders," "Violent World," and the crazed "Skulls." Everything ends with the giddily ridiculous "Braineaters," in which the chanting voices of the band bemoan their constant diet of cerebella and ask for intestines instead, but the real freaked-out highlight comes smack dab in the middle with "Mommy Can I Go Out and Kill Tonight." Taken from the show that made up the Evilive release, it starts out on the edge and, after Danzig delivers the title sans instruments, turns into an explosion of rhythm and feedback that should have killed everything within 50 feet of the amps.