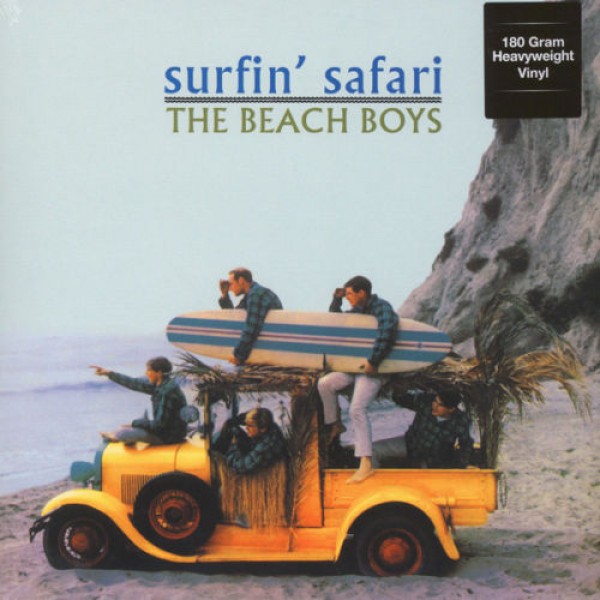 "Let's go surfin' now, everybody's learnin' how, come on a safari with me…"

Some of the best known and most beloved lyrics of the era, it was this call of the surfing wild that, on October 1st 1962, introduced the world to The Beach Boys' first studio album, Surfin' Safari.

With the success of the singles 'surfin" and 'luau,' Capitol records released Surfin' Safari–the first studio album for the three Wilson brothers (Dennis, Carl & Brian), Mike Love and Al Jardine. With the chart success of Surfin' Safari's name sake song and '409,' the album launched The Beach Boy's onto the world stage.

Though not nearly as intricately layered as later albums the band, or ultimately, Brian Wilson put together, Surfin' Safari holds its own musically. The landscapes as rendered by the lyrics are really a thing of beauty. Surfin' Safari transports us to a world of root-beer soda stands, dates at county fairs, waves and muscle cars. Win your girl a Koala bear and admire her blue eyes, blonde hair and lips like a movie star— the innocent lyrical content really does highlight 'So-Cal's' youth culture in this era. It comes across like an easy breath before the plunge into the political and social turmoil that shaped the world and lyrical expression of artists later in the decade. Surfin' Safariis a simpler album from a simpler time.

The album fires, more or less, from start to finish. 'Summertime blues,' 'moon dawg' and 'shift'—songs that were less well received than 'Surfin' Safari' or '409′—entail the beachy sounds of tinny guitar, loose bass and melodic vocal harmonies as much as any song on this or later albums. 'Cuckoo clock' meanwhile gives us a taste of the intertwined vocals and instrumentals that have come define Brian Wilson musically.

Surfin' Safari's contribution to the popularization of surfing is another legacy of the album. Be it shooting the pier in Malibu and Huntington or angling in Laguna, from Hawaii to the shores of Peru, some of surfing's most famous cradles made their way into the homes of people around the world thanks to this LP.

Whether laying on the couch, relaxing by a beach, or loading up the woody for a surf trip, the quintessential summer-sounds this album introduces us to really are fine, like a '409.'

All tracks of an album recorded on the A side, with Candix singles and demos on the B side - mono 180 gram.

B4 What Is A Young Girl Made Of