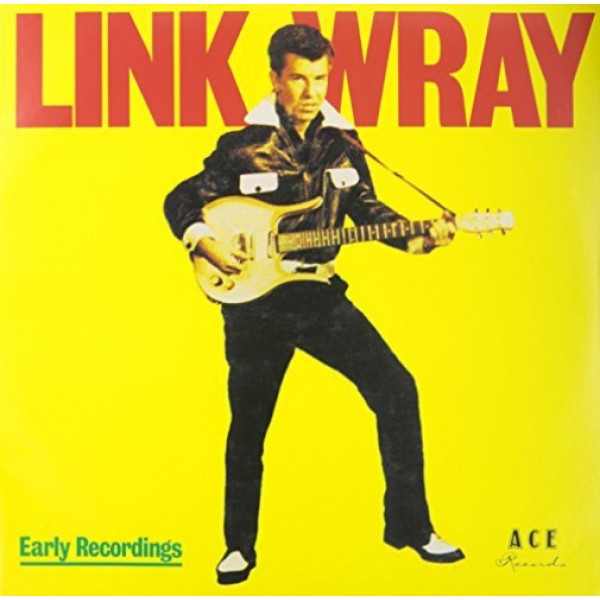 Link Wray’s guitar playing is raw simplicity to an outrageous degree. And “Early Recordings” is as perfect and barebones a primer to the great man’s work as his guitar playing itself. All tracks are culled from the period when Link Wray and his backing band The Raymen recorded one album and a little over a dozen singles for Swan Records between 1963-1966. Wray’s recorded material from this time were generally instrumentals of the most roughed-up kind that featured constant bursts of unaccountable, uncontrollable and unpredictable frenzy even hundreds of plays later. “Early Recordings” has remained in print since it was first released in 1978, and it’s no surprise as the ripples that emanated forth from his first reverberations drive through a ridiculous amount of pioneering rock’n’roll. Without exaggeration, his influence can be heard throughout successive waves of punk, heavy metal, rockabilly and anything else of the stripped down rock’n’roll guitar trash variety. On his early Swan songs, Wray & Co all kick-started into action, swung high and hit hard with just six strings basking in the heat of over-taxed amplifiers, and STILL sound nothing less than ahead of its time.

Simply because even forty years later, they still are.

“Early Recordings” is only a slight misnomer for this collection because Wray had already been recording for years. After his first single “Rumble” was released in 1958 for Cadence he recorded an album and several singles for Epic then recorded four singles on as many labels before Swan signed Wray plus attendant Raymen. At the same time, Link’s brother Vernon Wray had set up his own recording studio in Washington D.C., completing a setup for his brother’s band’s fat to hit the fire...which it promptly did. Their sound became as roughhewn as a split rail fence as though in backwoods defiance of the uptown string/horn lounge arrangements Epic had sometimes saddled them. It was as though inspired by the freedom to record whatever lived up to their standards, Wray stripped everything down to the most rudimentary of arrangements that bass, drums, rhythm guitar, occasional spooky-tone organ could afford as his guitar raged unbridled from the screaming blue beyond. They busted down the door with their first Swan single, “Jack The Ripper”/“Black Widow” and continued on a singularly aggressive course for the next three years they spent on the label.

The fourteen tracks collected here either boil over like only the most visceral rock’n’roll can while some of them are uniquely haunting. Some of them are both. Heck, those Raymen tear it up so good and un-proper on these instrumentals (bar one vocal track, but I’ll get to THAT flaming sucker in just a minute) that every drum hit from brother (Doug) Wray tom-toms make even the metronomic primitivism of Mo Tucker seem like Carl Palmer in comparison. Is that a cymbal he’s playing and smashing so tunelessly perfect or a fucking hubcap? His tom-toms sound like twin shoeboxes miked in an adjacent room while the instrumentals just rave on in the foreground guided by Link’s 6-stringed, shorthand sensibility that speaks with uttered vowels instead of words, grunts instead of speaking and somehow communicating it all through repeated volleys of unaccountable bursts of sawn-off riffing shot through with intermittent jarring vibrato. Sorta like Duane Eddy with dirt, but minus the twang and with twice the wang -- along with multiple ballpoint pen holes perforating his amplifier to make it sound better.

There is a nucleus of intensity at the core of this material, and it is not only Link’s murderous riffing that keeps the energy levels so high at all times but The Raymen’s expansiveness to hunker back and let Link defiantly take centre stage. There is slight ornamentation in the shape of organ or occasional vocals and they never detract but only make things stronger by keeping the backing only as necessary as possible. The album kicks off with a brutal hog-tying of “The Batman Theme” and although you’ve probably heard a dozen versions of it, you’ve never heard one like this. Especially after the opening with goofball Caped Crusader dialogue when a blistering run up the neck with a steel knife to approximate flames shooting out of the Batmobile’s backside, then proceeding to tear all the way down the centre to the end. Wray’s triptych o’ monomaniacal mega-strum and absolute scattershot jeen-yus in the form of “Jack The Ripper”, “Ace Of Spades” and “Fat Back” are all represented here: gutbucket as fuck and brutally simple. The quality of chords present in all three come across as being downstroked with attached lead weights, they’re so heavy. The drums could be played with one hand and the spindly haunted house organ passages aren’t taking any phone calls from the god of craftsmanship, especially since they ripped the phone outta the wall and bass player Shorty Horton is using it as the lowest string on his proto Dee Dee/Peter Hook bass lines of zone-out repetition. This constant sparseness of course left Link all the space in the world to unleash distorted rhythm or lead (and/or sometimes both simultaneously) guitar that then plunged into choruses where chords steam shovel into hurried flurries of clusterfuck abandon and threaten tear all up for good. “Crossties” is both the shortest and most unique track that showcases Link’s extreme restraint as a lead organ passage conjures nighttime journeys until he breaks off from his background reverb surf guitar runs with the most limited but all-embracing solo of the whole album. It’s profound as “Greensleeves” and haunted as a late night encounter at the crossroads with a stranger who seems to know who you are until you wake up and seem to remember it as a dream...

The sole vocal track is a cover of the Willie Dixon number “Hidden Charms” and it bears more a resemblance to a Chocolate Watchband rave-up than Howlin’ Wolf cuz Link’s own vocals are super-snarled and spat out drooling venomously in a frantic delivery of one take immediacy matched by his yanked and cranked punked-up guitar. It ends with a vicious tremolo bar jerked into a jarring wasp attack of unprecedented, zig-zagging noise that falls into a too-quick fade. “I’m Branded” holds a reverberated as hell solo that extends the wasp trapped and bumping between bridge and strings that is truly insane. But then again, so is the twisted dread of “The Shadow Knows,” the raved-up spatter’n’scratchings of “Run Chicken Run,” the flat-out rock’n’roll of “Turnpike USA” and the riding-tall-in-its-saddle twang “Mr. Guitar”... (Link was truly on a roll, and couldn’t help it if he tried.) “The Black Widow” and “Scatter” sound like they had their titles switched at birth because “The Black Widow” is far too breezy and buoyant a ride in the Raymen’s touring Cadillac for such an obviously downer femme fatale handle while “Scatter” maintains an ancient organ riff with a distant, Eisenhower-era radio soap opera feel that is creepy-crawly as hell. A later remake of “Rumble” closes the collection and it’s as simultaneously evil and hopeful as the original, though minus the extra vibrato drowning pool at the end. But the hopeful-yet-dragging-hearse-dirge qualities are unchanged as Link plays it both elegiac and threatening at the same time. It’s a proto-proto-metal classic and an audio ink blot test both at once that sounds as fresh as the original version did in 1958 as it does to this day...

Like I said before: a full forty years on.

A2 Ace Of Spades

A4 Jack The Ripper

A7 The Shadow Knows

Them - Belfast Gypsies - LP - color vinyl
The Belfast Gypsies were a direct spin-off of Them, featuring two members who had been in Them for d..
$22.98 text_tax $22.98
Add to Cart
Add to Wish List
Compare this Product

Cramps - Psychedelic Jungle - LP - color vinyl
Second album by the American garage punk band the Cramps. It was released in May 1981 on I.R.S. Reco..
$27.98 text_tax $27.98
Add to Cart
Add to Wish List
Compare this Product