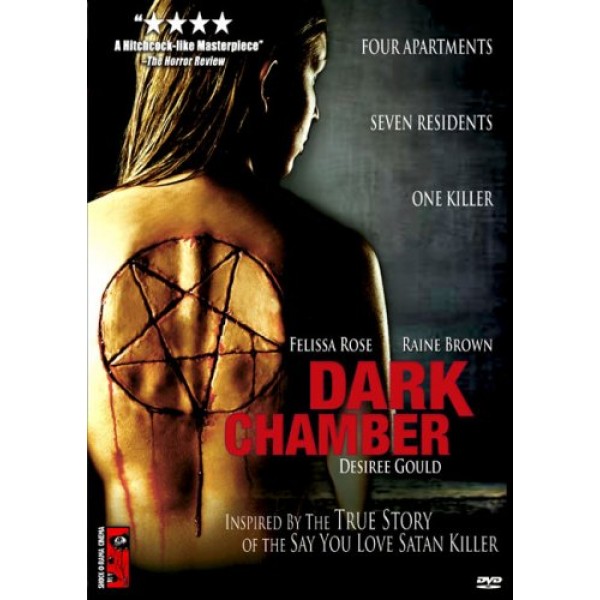 - In the tradition of Disturbia and Rear Window comes a thriller David Austin of Cult Cuts Magazine calls Smart, original, creepy and fun and a breath of fresh air...

When a dead body turns up, a local group of Satanists, The Black Circle, seem the most likely suspects. With the help of a friend, a criminal law student decides to conduct his own investigation by placing his neighbors under 24/7 video surveillance. But the deeper he digs and the closer he watches, the more suspicious and frightened he becomes...and with no one to trust, the killer may be closer than he thinks. Inspired by the true story of the Say You Love Satan killer.

... Co-starring Felissa Rose and Desiree Gould of the cult horror hit Sleepaway Camp, Dark Chamber is a suspenseful psychological thriller that will have you on the razor s edge of terror right through the final electrifying moments.

A worthy hybrid of Hitchcock and Agatha Christie, with a story that constantly comes up with layers upon layers of plot twists. Campfield's story becomes ever more elaborate as the time goes on, and often times it really sideswiped my viewing experience.

Campfield boldly takes a page from Rear Window; and modernizes it with, many times, brutally engrossing methods. Dark Chamber (reviewed as Under Surveillance); is such an exceptional and utterly involving murder mystery, and I was hooked.

Many of the surveillance scenes range from utterly fascinating to just plain hilarious, and we're introduced to the range of characters that are potential murderers and must connect the dots. Campfield gives some great direction with tight camera scenes and engrossing sequences where the characters come too close for comfort in discovering the culprits behind the murder.

Under Surveillance is an entertaining and engrossing murder mystery that really manages to blend tension and atmosphere and a surprise ending that pays off well. With good performances and direction, this is very much worth the watch. --Felix Vasquez Film Threat